Imagine it’s 1874 and you’re standing outside the mercantile looking through the front window. You hear the slow measured stride of boot heels against the board walk accompanied by the soft chink of spurs. Horses and wagons passing in the street can be ignored, but that subtle metallic rustle draws your attention. The sound quietly announces the approach of a man of importance, a man with confidence. You can’t help but turn your head. 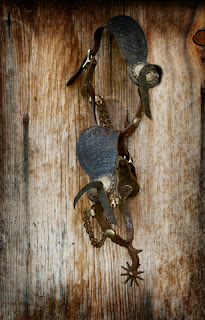 A cowboy’s spurs were used not only to give gait cues to his horse or help him stay on the back of a bucking horse, they eased the loneliness as he moved about a solitary camp. When he walked around town they gave him a sense of worth which has carried forward through time from the days of medieval knights.
In my new novel, A Tarnished Knight, the first thing the heroine notices about Ryder MacKenzie’s are his spurs, in particular, the buttons which had been forged in the shape of small hearts.
Early western spurs had two buttons at the front of the u-shaped heel band. The spur leather or strap, which was cut to fit over the curve of the wearer’s instep, attached to the button at the front of the heel band. This strap came in two pieces, the long piece, or tongue, and the short piece with the buckle. On the tongue side of the strap where it connected to the button on the outside of the foot, there was often a decorative metal concho or rosette. The buckle was worn on the inside of the foot to prevent it from catching on brush. Spur leathers varied in width and were plain or stamped with intricate designs.
The second strap, or tie down strap, attached to the second button and went under the arch of the boot just in front of the heel. Sometimes heel chains would be permanently attached to the spur and would take the place of this second strap. These chains created a soft chinking noise as the cowboy walked. This second strap or chain could also be left off, leaving the spur to be held in place by the upper strap alone.
To add to the noise of the chains, some cowboys attached two small metal pieces called janglers or jingle-bobs, which were shaped like pears or bell clappers, and clinked against the rowels. 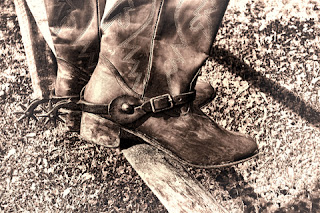 At the back center of the heel band was the shank of the spur. The shank of a western spur, usually about two inches long, curved downward. Some allowed the rowel to roll along the ground while the curve of others raised the rowel up. In front of the rowel, on top of the shank was a small, turned up hook or chap guard, which kept the leather from catching in the rowel.
Rowels were usually not more than three inches in diameter, with most two inches or less. Their shape varied from the blunt-tipped, five point star to an eighteen point sunburst.
Cowboys and vaqueros from the Southwest, Texas and California, wore spurs that had larger rowels (in the early days up to 6" and sharp), than the Northern cowboy, whose spurs were plainer than the more ornate spurs worn in California and the Southwest. Texas style spurs were heavy with the heel band about an inch wide. They were usually plain or lightly engraved. The fancier, more ornate spurs didn’t come into fashion until after the 1880’s.
At the time my story, a good pair of hand-forged spurs would have probably cost my hero ten dollars or more.


Rollins, Philip Ashton, The Cowboy—His Characteristics, His Equipment, and His Part in the Development of the West, Skyhorse Publishing, Inc., 2007
Posted by Kathy Otten at 12:39 PM 14 comments: