Billfold or Purse? Where Did the Frontier Cowboy Keep His Money?

During the draft stage of my latest book, A Tarnished Knight, I was unsure if my western hero would carry a billfold with paper money or a purse with coins. In the TV westerns I grew up with, respectable business men and gamblers seemed to carry billfolds while the rest of the men carried coins in their pockets.
After some research I discovered that paper money was not used on the frontier.
Gold or silver coins were used for purchases, and there wasn’t much use for anything smaller than a quarter--two bits. The term came from the Spanish-colonial milled dollar. Instead of dividing them into halves and quarters like our dollar, they were broken into eight  reales, (pronounced ree-ahl) or eight “bits” which were call “pieces of eight.” They were a small silver coin, and worth 0.12 ½ cents.  Hence, two bits became a quarter.  The half-bit, 0.6 ¼ cents, known as the medio, fip, or picayune was also widely used, especially in Louisiana.
Pesos and the big Mexican “’dobe dollars” were also popular until 1857 when the U.S, government banned the use of foreign coins.
In Kansas and Nebraska, Wildcat banks began printing script, but did not have the assets to cover the script issued and consequently failed, leaving the public holding worthless paper. Later, useless Confederate money only added to the suspicion of anything paper, including government bills (called Greenbacks) and the fractional currency used in place of coins.
In California private mints created gold pieces from a half-dollar, to a dollar, to the large, eight-sided, fifty dollar gold piece known as a “slug.”
The gold dollar became available in the 1850’s with a

Liberty head on one side and a wreath surrounding the number one on the reverse. In 1854 the Liberty head was changed to an Indian wearing a feathered headdress. In 1856 a different Indian head was used, but both coins stayed the same on the reverse side.
﻿﻿﻿﻿﻿ 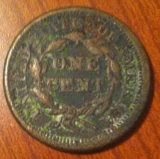 Other coins included the “eagle,” a gold piece worth ten dollars which had a Liberty head on the front and an eagle on the back. The twenty dollar gold piece also had a Liberty head on the front and an eagle on the back. It was known as a “double eagle.” Between 1839 and 1866, the “half-eagle” was worth $5.00 and had a Grecian head on the back.  From 1866 to 1908 it was an eagle. The “quarter eagle” worth $2.50 also had the Liberty head on one side.
The silver dollar included a flying eagle on the reverse and a seated Liberty on the face. “In God We Trust” was added in 1872.
So at the time of my novel, when the cow puncher headed into town, he carried his wages in coin, which he kept in a poke, or purse, or a draw-string pocket bag.  When he made a purchase, in lieu of the fractional currency used back East, cartridges of standard sizes were acceptable.
From the refuge of shadow, Ryder MacKenzie leaned into the light. "I'll raise you two." He tossed two silver dollars in succession toward the center of the table. A soft chinking sound followed each coin as it hit the pile of, what was for most men, a month's wages.  --A Tarnished Knight


Rollins, Philip Ashton, The Cowboy his Characteristics, His Equipment, and His Part in the Development of the West, Skyhorse Publishing, Inc., 2007
http://www.fractionalcurrency.net/
http://www.myfractionalnotes.com/home.html
Posted by Kathy Otten at 10:35 PM 7 comments: