When you picture the hero of a historical western, what kind of boots do you see him wearing?
﻿﻿ 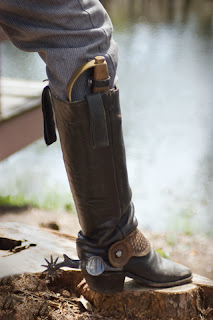 Boots worn by cowboys during the mid-nineteenth century looked nothing like the boots worn today.
They were about seventeen inches high, coming almost to the knee and ended in a horizontal line, like a stove pipe. They often had wide square toes and low heels. No fancy leathers or stitching were used. These boots were most often black, made of calf skin and were snug fitting. At the top, “mule ears,” which were thin leather pull-on straps, hung down on either side of the boot.
These early cowboy boots added to the protection of the chaps, guarding against dust and gravel, prickly pear and sticker bushes, and also shielded the ankles from rattlesnake bites.
﻿﻿﻿﻿Then in 1875, a cowboy on his way home from the Kansas City stockyards, stopped by a cobbler shop in Olathe, Kansas. He wanted a boot that was different from his Civil War-style boots. He wanted something that would easily slip in and out of the stirrup, with a slanted heel, and a high top with V-shaped front and back, so he could take his boots on and off without difficulty.
The owner of the shop, Charles Hyer had come to Olathe in 1872 where he found a job teaching shoe and harness making at the Olathe School for the Deaf. Charles, who had learned boot making from his father William, opened a cobbler shop on the side and hired his brother to help him run it. http://www.kshs.org/kansapedia/hyer-boot-company/12093
The cowboy was so pleased with Hyer’s work that he returned to Colorado and told others about his new boots.
﻿These early cowboy boots were fairly plain. Any fancy stitching was limited to  the boot tops, but this was not common. The floppy mule-ear straps were replaced with a pair of leather pull-ons, sewn into the top inside of the boot on each side, so that they extended above the tops about two inches.
Nearly all these new boots were made of black calf leather and the toe was more rounded than pointed. https://www.kshs.org/kansapedia/cool-things-hyer-cowboy-boots/10301
Cowboys who roped cattle on foot found the high, thin-bottomed heels dug into the ground and helped them keep their balance. The usual, forward sloping heel was about two inches high, but some boots were made with a square heel, like cavalry boots. The insoles were thin so riders could feel the stirrups.
These boots had vamps of the best quality. They fit tight around the instep and this gave the boot its primary hold.
Most boots were made in small shops that catered to cowboy trade. By 1885, however boot makers began adding intricately stitched designs, cut-outs, and color to the footwear.
Pegged boots used hardwood pegs to secure the foot portion of the boot to the sole and cost a few dollars more than sewn boots.
Cowboys who wanted custom made boots gave the boot maker a paper tracing of his foot along with his instep measurements. He could spend as much as he wanted for boots, but very few men felt the need to invest a great deal in their footwear. Some cowboys had their boots made to order, but many bought them ready-made.
Boots were usually the most expensive item in his wardrobe. Prices varied from 7.00 for ready-made, to 15.00 for made-to-measure.
For a time the cowboy boot was the most popular footwear in the West, but by the mid 1890’s the boot had been replaced in many locations with heavy-duty shoes. Cowboys were no longer willing to pay 15.00 for a pair of boots. They wanted substance instead of show and boot makers grew worried that the most popular footwear in the west would become obsolete.