Every Knight Needs a Mule


In my new release, A Tarnished Knight, the hero, a-down-on-his-luck bounty hunter, is trying to start a new life. He has a new ranch and a small herd of cattle, but his cattle are stolen, his horse is killed, and in trying to obtain another he loses all his money in a poker game. As I wrote the story I intended for him to only have enough money to purchase a plug-ugly nag that no one wanted. But when I wrote the scene, instead of a sway backed old horse, a mule appeared in the corral. I thought, perfect.  A mule is more humiliating for a cowboy to ride than any horse.
I’ve heard that actors say they have to be careful working with kids and animals because they can easily take over the scene. That’s exactly what happened to me with this mule, whose personality quickly took over the book. By the time I finished, Percy (secondary characters always have a name), had his own story arc.
So what exactly is a mule? Here are a few quick definitions.

A donkey is the domestic ass. The male is called a Jack, and the female a Jenny. A Hinny is the hybrid cross between a male horse (stallion) and a female donkey. A mule is always the offspring of a horse (mare) who has been bred with a donkey (Jack).  The male mule is called a john mule and the female a molly mule.
Mules are easy keeper and don’t need a lot of feed to stay fat. They inherit the best qualities from both the horse and the donkey. The horse gives the mule his size, color variation, and courage. The donkey is responsible is for the mule’s strength and endurance.
The mule’s body is covered with masses of long smooth muscles while the body of the horse has differentiated masses of muscle. This can be seen in the chest where the horse has two distinct muscle groups and the mule has one wide mass of muscle. Another example is in the hind quarters where the long, smooth, wide muscles of the mule allow him to kick forward, backward, to the side, and even allow him to scratch the top of his head. Horses can’t do this because of their smaller, bulkier muscle mass. 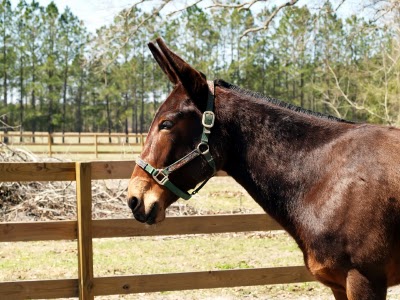 A strong desire for his own happiness, health, and self-preservation are traits the mule has inherited from his donkey father, which are often mistaken for stubbornness.  A horse carrying a heavy load can be made to push through his exhaustion until he drops. The donkey will stop and rest when he’s tired and won’t move until he is ready. Also with his limited depth perception he will stop and study the brook before he decides to cross.
The mule has also inherited from his donkey sire low withers and flatter back. This is where the hero of my novel runs into trouble. The bars of a horse saddle curve to accommodate the curve of the horse’s back. When placed on a mule, the back of the saddle tips up and causes the front of saddle to rub as the mule moves.  This combined with the position of the cinch will cause the saddle to slide forward until the cinch stops just at the little hollow behind the front legs. It will rub and cause additional sores.
Mule bars keep the saddle low and flat with less rocking, combined with rigging that has been moved closer the  center of the belly. Other aids can also help, such as a breast collar if the saddle wants to slide back, or a crouper under the tail if the saddle slides forward.
When treated with kindness and understanding, mules can learn to trust and obey.
What are your thoughts on a cowboy hero who rides a mule?
A Tarnished Knight is currently available for your Kindle and world wide release is scheduled for February 21, 2014.
http://www.amazon.com/A-Tarnished-Knight-ebook/dp/B00G8GTFPQ/ref=sr_1_4?s=digital-text&ie=UTF8&qid=1382962374&sr=1-4&keywords=Kathy+Otten#_
Sources:
Hodges, Meredith, Training Mules and Donkeys A Logical Approach to Longears, Blue Ribbon Books, Alpine Publications, Loveland, CO, 1993
McClintock Saddle Works, http://www.mcclintocksaddles.com/mules.html  3/18/2010
Posted by Kathy Otten at 8:57 PM No comments: