Stage Drivers of the Old West

Welcome to my new blog.


I am a writer of Historical Romance. As I explore the past I hope to share with you the bits of information I seek out or stumble upon as I research my novels and short stories. In my newly completed novel, A Tarnished Knight, Ryder and Victoria travel on a stage coach. Here is a bit of history on the drivers of those classic western icons. 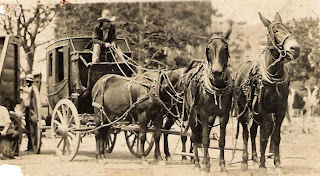 Nameless and usually the first to be shot in almost every western movie and novel, the Overland stage coach driver sat high on the box seat of his Concord coach and sent his team racing across the country, up and down mountains.  Day and night, he battled heat, cold, rain, bandits and Indians in his effort to get his passengers safely to their destinations--all for the sum of forty to seventy dollars a month, plus board.


These tough and daring men came from all kinds of backgrounds.  They were known as reinsmen,  whips, and  Jehus.  The name Jehu came from II Kings 9:20.  “…and the driving is like the driving of Jehu… for he driveth furiously.” On a whole, they were shy, cheerful and polite men.


An excellent cross country time for a stage coach was 150 miles a day, or 6 miles an hour. The stage ran day and night with brief stops every 10-12 miles to change the horses or mules. These stations were known as ‘swing stations’ and in less than ten minutes the stage was underway again.


Each driver had a route of approximately fifty miles. At the beginning and end of his route was a station known as the ‘home station,’ (where passengers could also pay a dollar for a meal).  From there another driver continued the route while the first stayed  to rest up, until the return run when he would then retrace his route.


In a six horse team the distance from the tip of the leader’s nose to the rear wheels of the Concord coach was some 50 feet. From front to rear each pair of animals was referred to as leaders, swings, and wheelers.  Off meant the right side, the near side was the left.


The driver sat with his hands in his lap. The reins for the leaders were held between the index and middle fingers; those for the swings, between the middle and third fingers; and the wheelers, between the third and little fingers.  The driver would gather each line by drawing with the fingers and let the reins out by separating his fingers just enough for the ribbons to slide through.


The whip was grasped between the thumb and forefinger with the butt cupped against the heel of the thumb and the stock held parallel to the lines. It was used mainly to intimidate wheelers.


Made of hickory, about five feet long with an eleven or twelve foot buckskin lash, the driver’s whip was a very personal thing, and he would often have it engraved or embossed with silver or gold. They never let their whip out of their sight or loaned it to even their closest friends.


Drivers never wore gloves unless they were made out of silk or the finest buckskin, even in the bitter cold.  They would risk frostbite rather than lose their ability to feel the reins.

Making a turn involved a combination of reining, slight braking, and voice.  Driver’s preferred the teams to be hitched loosely so the horses could perform individually.  A top driver could hold the wheelers steady while the leaders made the turn. The brake was not fully applied as it was better to keep the wheels rolling so they wouldn’t slide. Good coach horses knew their names and understood the driver’s tone of voice.


Drivers enjoyed showing off their skill and as they approached town, the might urge their team into a full gallop. Then as the neared the hotel, apply the brake and bring their team to stop right at the hotel steps.